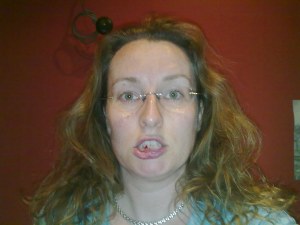 This was the evening after the morning before.

Another weeny gummy bleed. Where this one came from I’m not sure – think it started around mid afternoon – aaaah mebbe it was that piece of Soreen I had with my cuppa?? It is very sticky and probly sucked a bit of my gum off. Nice. Anyway, it was still going as I headed off to bed.

You shot up? says Ade.
No, says I.
You won’t sleep, say he.
Oh but I will, say I.
I got my night nurse you see and with that I could sleep through a boobquake.

Where was I?? Oh yes, the clotting factor conundrum…

I was talking to a fellow bleeder at the hospital Tuesday lunchtime and we both admitted that where possible – we put off having an injection until it is absolutely desperately necessary. Now it’s not like either of us have a problem injecting – we don’t. Though I know bleeders who hate it with a passion and I really wouldn’t want to be in their sensible shoes.

It’s funny – when I have to do prophylactic treatment, i.e. twice daily injections to cover a period or a procedure of some sort, I set my alarm at 9am and 9pm and do my jabs no problem. Ok – so mebbe there is a little cursing and harrumphing but I do em – night after morning after night after morning.

So why is it different when I need to treat on demand??

It seems much more of an effort. Much more of a chore. A hassle. It bugs me frankly that I need to have my treatment. I mean why for God’s sake?? Why do I have this damn disorder that means I need to stick a needle in myself to stop my gum from oooooooooozing like an insidious leaking leech.

Is it because it reminds me of my imperfection? But why would that be, as this process fixes me?

Do I hate injecting that much that I avoid it at all costs? Nope, once I get on with it, it’s easy and generally restores me to a non bleedy state.

Am I just a lazy arse? Partly I think. My friend and I both agreed that when it comes to it we often just simply cannot be bothered.

Is it the cost?? Is it that I feel it needs to be really bad to warrant injecting? I have access to this treatment that not everyone with funny blood has. Sometimes yes, I think I postpone longer and longer. I wait – wait for the bleed to continue past 5-10 minutes normal bleeding time, past 1-2 hours slightly annoying bleeding time, onwards through 3-4 hours really annoying bleeding time, we reach 8 hours and I realise that I’m still oozing. Then do I inject??

Any longer than 10 minutes is abnormal, should I not just inject once that has been breached?? Why wait so damn long…

You know, sometimes I think if I just ignore it, it will stop. If I don’t think about the bleeding it’ll just clot up and a few hours later I’ll go – “Ooo, a blood free gob! How lovely.” Very occasionally I find that happens, and a bleed I was previously aware of has miraculously gummed up of its own accord. Another reason to put off the prick.

Of course, should I be bleeding at a more profuse rate – period pace for example – I will get on with it. I don’t sit around gushing. (Except over a really luscious piece of cake – and even then I’d stop to shoot up if I were bleeding over it.)

Mebbe it’s just I judge the oozers as not bad enough to treat initially. They are just something I should accept and not treat unless they hit 12 hours? 24 hours? It’s a valuable treatment – should it be saved for more extreme circumstances. Praps I’m not truly suffering unless I’m swallowing blood for a significant number of hours?

But why should I accept any excess bleeding even if it is an infinite dribble?

Just get on with it – shoot up and shut up.

This is a story of a girl named Ros. She was adopted as a baby and grew up with a severe bleeding disorder called von Willebrands disorder. Ros lives in Worcestershire with her amazing husband and a Springer named Meg. She’s had a lot to deal with over the years and this is how she’s dealt with it. Or not. She especially likes writing about herself in the third person.